The pay scale editor groups the following elements on one screen:

One of the recurring questions asked in the transition to a salary pay scale is the question of cost. This is why the tool always displays a calculation of the increase in total payroll. So, whatever the modifications made to the pay scale, you will always have a clear measurement of the impact right before your eyes.

The formula of the pay scale

The components chosen to appear in your pay scale are found in the formula of the sidebar. By clicking on them, you’ll be able to edit the name or description of the components. Click “Validate” to validate the changes.

The description of the components will appear in the layout of the pay scale. Do not hesitate to complete it by writing descriptions that will clearly speak to the team.

In this section you’ll find the list of the pay scale tiers with their names and amounts. After the generation of the pay scale, values will be based on each one, according to your desires (more details in the article about TODO Generating the pay scale).

What to check for each component?

In preview form, the total payroll is recalculated with each change but you can reverse it at any time. Changes are only complete after clicking Validate.

Use the horizontal scroll bar to access components that are not visible on the screen.

The salaries of the team 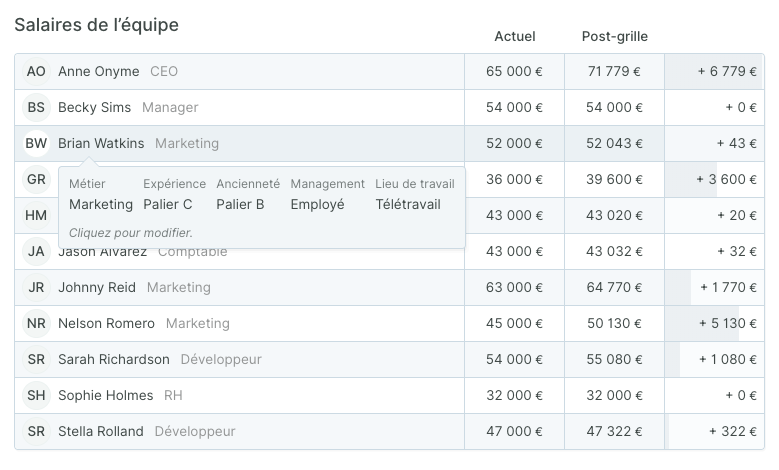 The definition of the pay scale and the qualification of the employees make it possible to calculate the new salary of each one. This section summarizes the current salaries as defined during the import, in comparison with the new post-pay scale salaries. The last column provides a visualization of the salary gain between the two.

By hovering over each employee, a preview of their qualification will be displayed. Click an employee to open the TODO LINK Compensation Editor.

Refinement of the pay scale

Now that each of the sections has been presented we can get to the heart of the matter: how to evaluate the quality of the pay scale and how to correct any problems.

In relation to wages, three scenarios are possible:

Congratulations, your first version of the pay scale is ready! 🎉